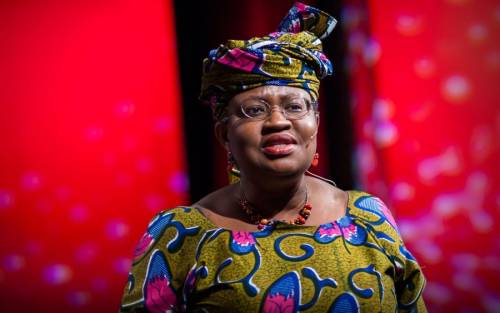 She polled 104 votes from 164 member countries to defeat South Korea’s trade minister, Yoo Myung-hee at the final stage of the race.

Speaking during a virtual press conference last Friday, she said the 55-man African Union (AU) officially endorsed her over her only opponent, Yoo Myung-hee of South Korea.

Many Nigerians have sent congratulatory messages to the new DG over her victory via Twitter.

“We congratulate one of Nigeria’s brightest, Ngozi Okonjo-Iweala on her election as WTO DG. She polled 104 out of 164 votes to defeat South Korea’s Yoo Myung Hee and would be officially announced by 3pm WAT.

“This is the kind of “Just In” and “Breaking” we want to read, not Buhari experiencing shock at an event that has happened 3 days before.

The first African to take up the position!

“Congrats ma @NOIweala least some good news for the moment.”

“Yet, some illiterates still speak ill and rubbish a female child as if they are worthless! Mtchew… This is a female @NOIweala doing what a thousand men cannot do. Congrats ma. 🇳🇬 and Nigerians are so proud of you”, several tweets read.

The official announcement of the former minister’s is to be made by the WTO at 3pm Nigerian time.