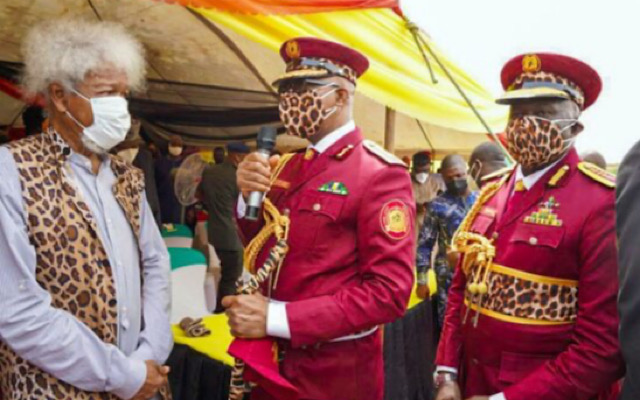 Speaking at the inauguration, the governor said the primary responsibility of the  security outfit is to prevent crime, noting that its operatives had been carefully chosen and trained to secure lives and property.

He added that the state government had provided the outfit with vehicles, motorcycles, communication gadgets, technical back-ups and the political will for an effective take-off and efficient operation.

“Your role is primarily to prevent crime. You are to do this through systematic intelligence gathering and collaboration with other law enforcement agencies, especially the security network agencies of other states,” Abiodun said.

While decorating Soyinka as the Super Marshall of Amotekun, the governor said the outfit is very close to his (Soyinka’s) heart and issues of security particularly in the South-West.

He therefore presented the playwright some of the Amotekun insignias “being the Super Marshall of Amotekun in Ogun State.”

The herdsmen crisis in parts of Ogun has been worsening in recent times with many residents of Yewaland displaced in far away Benin Republic.