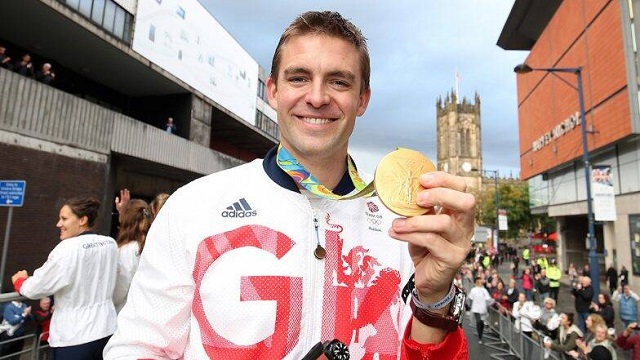 Pete Reed, a 38-year-old 6ft 6″ Lieutenant Commander in the Royal Navy and Three-time Rowing Gold Medalist Winner for Britain has suffered a rare stroke that has left him paralyzed from his chest down.

The rowing champion made this known via his verified Instagram handle @petereed.

Reed posted: “Spinal strokes are very rare. They essentially starve the spinal cord of oxygen, which can kill off the cells that transmit the signals sent between the brain and (in my case) the lower body.”

Describing the situation, the gold medalist said that doctors are yet to determine what caused his stroke.
“It was in the middle of my spine, so I’m currently paralysed beneath my chest.

“My personal support network continues to be bombproof (thank you so much) and I am handling myself every bit as well as you would hope.

“Thanks also to all of you who have offered to help… right now I don’t even know what to ask for.

“I feel like I have everything I need at this stage”, he wrote.

There’s a silver lining, however, as Reed disclosed: “All the other news is great. My arms are still strong and my brain is still as average as it ever was.

Reed had earned a gold medal in the Men’s coxless four at 2008, 2012 Olympics and in the Men’s eight at the 2016 Olympics in Rio de Janeiro. He had also won five gold medals and three silver medals at the World Championships.