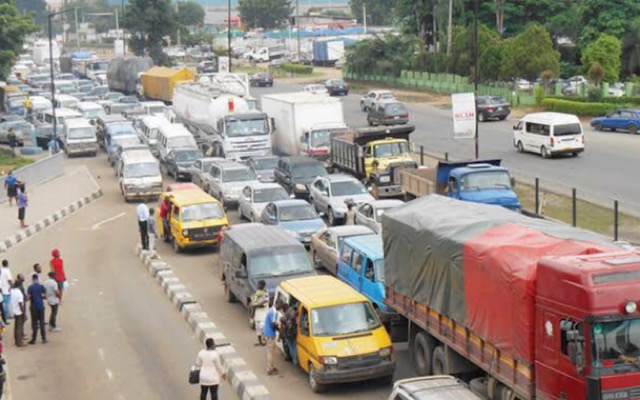 Many commuters were left stranded on the road Saturday following the crash of a tanker laden with Premium Motor Spirit popularly known as petrol on the Lagos-Ibadan expressway.

The tanker belonging to the Nigerian National Petroleum Corporation crashed in front of the British American Tobacco Company which disrupted traffic flow in the popular busy road.

Operatives of the Federal Road Safety Corps and Fire Service were on ground to direct traffic and prevent the tanker, which was spilling its content, from exploding.

The logjam on the expressway was worsened by the ongoing rehabilitation work as many motorists were diverted to Ibadan-Ijebu-Ode road as alternative route.

FRSC officials’ effort to ensure free vehicular movement proved abortive as traffic was on a stand still for several hours on the expressway and Ibadan-Ijebu-Ode road.

Many commuters resulted to trekking long distance to get to their destination as most of the commercial vehicles plying the route were stuck in the gridlock.

As of the time of filing this report, the tanker was yet to be evacuated from the road which prolonged the gridlock.