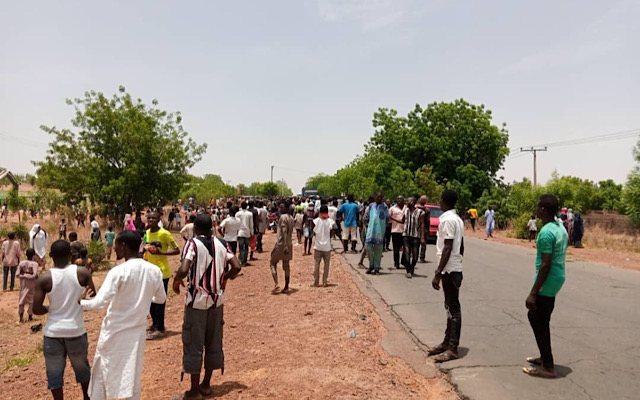 The recent outburst of some Covid-19 patients and the subsequent protest that led to the patients taking to the streets in Kwadon Community of  Gombe State has once again exposed the inadequacies of some state governments in managing the pandemic in the their respective states. It  also clearly demonstrates that a lot more needs to be done in the area of sustained sensitization and patient counselling by the managers of the pandemic.

It could be recalled that recently there was  pandemonium in Kwadon Community as COVID-19 patients forced their way of out an isolation facility in Kwadon community of Gombe State, protesting   what the the patients described as “poor treatment  and care” by the Gombe aetate government and the state COVID-19 Taskforce. Our correspondent, who monitored the protest that trended on social media platforms,  learnt that about  20 patients or so  took over the Federal highway linking Gombe State to Biu community in Borno State.

The patients in the video were protesting inadequate  care, which according to them, had worsened their medical condition within the isolation facilities and as such would prefer to get outside for self-medication and proper care
An eyewitness at the protest scene, who spoke to our correspondent on the condition of anonymity said “we in the community have been in serious shock knowing how dangerous this disease is and what the protest means with regards community transmission.”
“Government should do the needful before it gets out of hand because the patients we saw today are really angry and we don’t know what could happen next. They were chanting that the state government lied against their status while some were saying they were fine. This is serious,” he said.

It is imperative to note here that prior to the protest, the state government did not act on the early warning signs in mitigating the unfortunate incident. The signs were all there in the videos shot inside the facility showing the patients complaining about their plight and how they were being treated in isolation.  “The state Task Force team should have acted on those videos that trended on social media handles long before the protest.  Suffice to say the protest jeopardises the work of the state task force team and also exposed members of the community on the possibility of contracting the deadly virus, a public affairs analyst said.

Athough Gombe State government through the state Commissioner for  Information had promptly reacted to the unfortunate and avoidable incident, the action of the state government was nothing but just an attempt to what can be described as “damage control,” the analyst said.

According to  the  commissioner, Alhassan Ibrahim Kwami, the patients protested because they misunderstood their Coronavirus status. He said all the patients at the Isolation centre were asymptomatic, so there is no need to give them any drug.”Not knowing that they are asymptomatic and there is no way anybody can be giving drug without showing any symptoms,” Kwami said.

The unspoken thoughts on the minds of so many residents of Kwadon Community and indeed Gombe state and Nigeria at large was, “the state Government  should have ensured a sustained sensitization and counselling of the patients before it degenerated into such a national embarrassment”.  Perhaps it was the outcry and apprehension  of the general public that triggered another attempt at damage control by the Gombe State Taskforce on Covid 19 .

The task force, under the leadership of Prof Idris Mohammed, tried to disabuse the minds of the general public  that the protest was not as a result of neglect by authorities as claimed by the protesters; rather it was on an issue that unfortunately went out of hand. According to the press statement signed and issued by  Dr. Mohammed Kwami, State Focal Person on Covid-19 Pandemic Response, admitted that , indeed a minor issue that could have been nipped in the bud had metamorphosed into a protest.

The statement read in part: “Truth is; one of the female patients was admitted to the centre with a wound she got long before she came into Gombe State. The Taskforce took it upon itself to treat the wound, similar to what was applied for all the isolated patients; all those with other background ailments are being managed irrespective of its relation to the Covid-19 infection. Unfortunately, the patient’s sister, who was understandably emotional, was of the opinion that the condition can only be treated by traditional healers back in their village. Although, the patient has the right to choose where to seek for health care services, taking into consideration the risk of transmitting the Covid-19 in the communities, the Taskforce was reluctant to allow her to be managed at home. Public health consideration outweighs personal interests in this context. This was the primary issue that escalated into the protest. The Taskforce has since evacuated the said female patient to a place in her hometown in a location with minimal risk of community transmission”.

“The task force has since its inauguration been working assiduously to meet the immediate needs of the patients at the isolation centre, especially food and other essential services. Medical attention is being given to them with doctors and nurses attending to in line with the protocols of the Nigeria Centre for Disease Control (NCDC), and the Taskforce will not allow self-medication at the centre. It is therefore inaccurate for anybody to claim that the patients are being “poorly managed.”

“The Taskforce notes that the protest was a manifestation of multi-faceted impacts on economic and psychological factors associated with COVID-19. The social implication is clearly visible. Majority of the cases in the state are menial workers who returned from Lagos, Abuja or Kano, after realizing they could not bear the consequences of the on-going lockdowns in those cities, as their earnings depend on daily outing. Now, despite the border restrictions, the Taskforce understood the difficulty these returnees found themselves in and welcomed them into the State with agreement that they have to be subjected to screening for the disease. Those that turned out positive were therefore isolated for the safety of the general public. All their needs with regards to accommodation, feeding and treatment are being taken care of by the government. However, some of the patients demanded that the government should cater for their immediate family members since they are in isolation and cannot provide for their respective families. However, as you are aware, the Gombe State Governor, Muhammadu Inuwa Yahaya, has established another committee on distribution of palliatives. Recommendations had already been forwarded to this committee to consider the immediate members of the index cases, even before the staged protest”.

Whether the Taskforce  had a valid point or not in their response to the incident, one thing stands out clear:  they need to chart a new course on how to continually engage the patients in counseling them, from day one of their Isolation until when eventually they are discharged and reunited with their families.

And as if to confirm the fears of so many, few days after the Kwadom protest, COVID-19 patients at the Federal Medical Center, Gombe also took to  the streets ,too,  protesting the same inadequate treatment by the Covid 19 managers at FMC Isolation centre. The FMC patients also  claimed that they had not been given drugs and left to fend for for themselves alongside other patients at the hospital.

Speaking on the FMC incident,  a resident in the neighborhood  of the hospital, who spoke to The Politico on condition of anonymity, said, “It is obviously clear that we need the intervention of the FG on the current situation in Gombe State because the state lack the capacity to manage the pandemic. Two similar incidents within a span of three days, it is unacceptable.

“The lives of innocent citizens are at risk as these patients have been out of control and have been mingling with the public which will do more harm than good.

The above position was also  buttressed by a public health commentator, Mrs. Bulak Afsa, by apportioning greater part of the blame for the protest on the Gombe State Government.

“As managers of the patients, they should have carried out a sustained awareness creation even before the confirmation of the index case. What the protesting patients said, and the Covid Committee did not deny gave credence to the alleged negligence on the part of the managers of those patients. You can’t isolate someone without educating the person on the reasons of being  isolated”, she said.

Just like it was observed regarding  the committee’s lukewarm attitude on  sensitization and awareness creation, the level of media engagement is also very weak considering the gravity of the pandemic. It was reliably gathered that the state COVID-19 committee is carrying along only two media organizations and that situation updates on the status of the state are not holding  as it should.

The task force team has also confirmed one of the worst fears  resulting from the protest  saying , “It is disheartening that while the patients came out to protest, some residents of Kwadon freely mingled with them despite the risk of being infected. Their action was indeed uncalled for. The taskforce is disturbed that it appears some residents of the State still consider COVID-19 as a hoax”.

It is worth mentioning that some of the actions taken by the taskforce were commendable. This action was highlighted in their statement, where they disclosed that, “the taskforce has already commenced contact tracing of the people in Kwadon community that might have mingled with the isolated patients during the protest in order to guard against community transmission of the virus”.

A resident of Gombe metropolis ,  Dr. Makama Adamu, succinctly captured the mood of the general public when he mentioned to our correspondent that, “ this is a wake up call not only to Gombe State, but other states too, to pay attention on their Isolation centres,  being the first point of treatment. Also, patients isolated should be treated as VIPs in order to mitigate reoccurance of the ugly situation and halt  community transmission of the deadly disease ”.