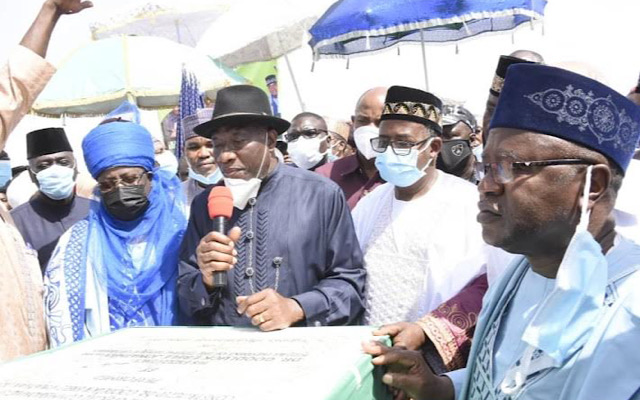 The newly constructed Sabon Kaura road in Bauchi metropolis has been named after the immediate past President of Nigeria, Dr GoodLuck Ebele Jonathan.

At the commissioning on Tuesday in Bauchi, the former president  appreciated Governor Bala Mohammed for the developmental projects executed by his administration in the state, saying that Governor Mohammed is replicating the same feat he achieved as FCT minister in Bauchi State.

Jonathan said that he never knew Governor Mohammed when he made him the Minister of the Federal Capital Territory, adding that even though it is a culture in Nigeria to give political appointments based on personal relationship, it was not his own way of doing things.

“Bala Mohammed is a son and younger brother, even when he was a Minister, he worked with commitment and I gave him a free hand to run the ministry. I want to use this opportunity to also thank the good people of Bauchi for supporting my good son, you have done very well in supporting him. It could have been difficult for him to win the election without your support”

“Since I left office, this is the first time I am coming to Bauchi State, I came to visit Governor Bala Mohammed and commission a road project that was named after me. I am grateful for immortalizing my name and my links with Bauchi emirate by naming a road after me. When an infrastructure is named after you, it is something you cannot devalue, even if you die, the name still remains there”

“Within this period that Bala Mohammed is Governor, I have been asking questions, even in my meetings with him . He has done quite a number of projects that I wonder where the money comes from. Before coming, I tried to get a list of all the key projects he has done and when I looked through, I  marvelled at it, because these days, the economic environment is not that friendly. It is not easy for a governor to raise money and execute all these projects” he said

Earlier in his welcome address, Governor   Mohammed, while welcoming the important visitor to the state, said that Dr Jonathan was instrumental in his coming to limelight in Nigeria, adding that the former President made him  Minister without knowing him or belonging to the same party.