She laughed and cried. It was a raucous laughter laced with a rheumy sob. For half a decade since she flipped through a journal of trees on her friend’s coffee table in Washington DC, where she lives, Anna Lee had waited for this moment, the moment she could “hug it, kiss it and sit on its protruding roots.” Now she is, hugging the Baobab, kissing it and “feeling the whole moment is other-worldly.”

It made her understand “how Neil Armstrong might have felt, when he stepped onto the moon.”

She was 12 years old when she read Antoine de Saint-Exupery’s 1943 classic fable, “The Little Prince.”  It was a class assignment in the middle school, and she didn’t pay much attention to it “except at face value.” She was just a child, though she thought she was the adult, whose thinking, the story mocked.

She could not understand the moral metaphors in the story.

A lone pilot crash-lands in the Sahara Desert, he goes to sleep the first night and was awakened at daybreak by “a funny little voice saying ‘Please…draw me a sheep…’” Standing before him is the “most extraordinary little fellow – The Little Prince.” The pilot realizes that when life’s events are too difficult to understand, there is no choice but to succumb to their mysteries. He pulls out pencil and paper….and thus begins the wise and enchanting tale.

The little prince comes from a small planet, an asteroid “hardly any bigger than he was.” His planet’s soil is infested with baobabs which must be pulled up right away as soon as they sprouted. He tells his new friend, the pilot, of one planet that was inhabited by a lazy man. The man had neglected three bushes which happened to be baobabs and when he tried to attend to them, it was rather late – they had overgrown the whole planet, their roots piercing right through it. If the planet is small and there are too many baobabs, the little prince tells him, they “make it burst into pieces.”

It was the illustration of the lazy man’s small planet overgrown by three baobabs buttressed to their shrubby ground, as drawn by the pilot that caught Anna’s attention when she read the book again at 18. The baobabs stood with a somnolence apparently occasioned by the massiveness of their girth and their roots had pierced through the planet to an explosion point. Being a fictional story, Anna thought that the baobab was also a fictional tree.  But, for the first time, “the story just opened up” to her and it “made complete sense, the moral metaphors seemed perfectly clear.” She was intrigued by the baobabs and as any 18-year-old would, she and her friends, dissected the different moral stories in the book and someone mentioned how strange baobabs look.  “Ah!” one of the friends remarked. “Remarkable trees of the world.” Then again, she watched Rafiki make a home in a baobab tree in the cartoon movie, “The Lion King.”

Four years later, Anna, wanting something “real and honest” looked out to nature. It was in this pursuit she lifted the tree journal at her friend’s place and scanned through it: the Redwoods, giant Sequoias, all in glossy color. And then the BAOBABS! “Isn’t this a made-up tree?” she seemed to ask no one and wondering if her eyes were playing tricks on her. “Is it real?” That begun her “tree hunting” trail which first took her to California to see the redwoods.

Traveling to the west coast, the first in her life, Anna felt she was “returning to childhood.” As a primary school teacher, she felt going back to her childhood would make her a better teacher. Her rendezvous with the redwoods, the tallest tree on earth; the sequoias, the largest tree in volume, she says, reinforced her baobab obsession. “Nature does not lie,” she thought, and she fell in love with it. Anna “spoke baobab, slept baobab, dreamed baobab” and if she had access to it, she would have “ate baobab.” She saw beauty in its ugliness, in its “upside-downness.”

Dr. Ahmed Yerima, a botanist with the Biological Sciences Department of Gombe State University in Northern Nigeria describes the baobab or Adansonia as a massive tree that grows to about 30 meters with trunk diameters up to 13 meters. It looks like a tree turned upside down with its branches below the ground and roots upwards. Baobabs are of different species, he said, and are found only in the arid and semi-arid savannah regions of Africa, Australia and India. Adansonia digitata is the specie found in Nigeria. They can live for several thousand years and are an excellent source of Calcium – from the leaves, and Vitamin C – from the pod. The pod is now an export commodity to Europe and North America.

Anna learned from her Nigerian friends living in the US that in Nigeria, the baobab is called Kuka and the leaves make mouth-watering soup when prepared with the right ingredients. The more Anna learned of “Kuka” the more obsessed she became. She confessed she hadn’t felt this way, even with her first date, and longed for the day she would sip the syrupy refreshing white juice made from the pulp of its pod.

One morning her phone rang. It was Keke Bongos Ikwe, her Nigerian friend who had relocated back home from the US. “Anna, would you mind visiting Nigeria?” Keke asked?

“Mind?” Anna asked in reply, “Can you hear those steps pounding towards you? That’s me.”

It seemed so surreal, Anna could not, for the few days coming, believe she had been given the “ticket” to “meet my baobab.” Whoever cared to listen to her from then, would not hear anything but baobab, kuka and Nigeria. Her drive from Abuja Airport into the city when she arrived was heart-pounding for her. She looked out for the baobabs, but there were none.

Bewildered, Anna tottered on the brink of insanity. This was exacerbated by the looks people gave her when she tells of her undying desire to “meet” the Kuka. To them, not understanding the perceived idiosyncrasies of the American, Kuka is “just another tree.” Moreso, Sagir, Keke’s friend, told her that the northern part of the country where baobabs are found, was just recuperating from the Boko Haram religious crisis that had consumed over a thousand lives. Anna became ill, until we met.

“That is what I had for breakfast,” I said.

And thus, begun the over 400-kilometer trip northwards. 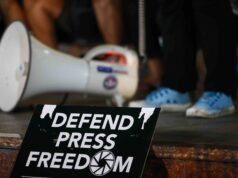 Strengthening Press Freedom at Home and Abroad: 10 Recommendations for the World’s Democracies