The Chief of Defence Staff, General Lucky Irabor, has said a leader of the Islamic State in West Africa Province (ISWAP), Abu Musab Al-Barnawi, is dead.

Irabor confirmed this on Thursday while fielding questions from newsmen at the statehouse.

Al-Barnawi’s death comes months after Abubakar Shekau, Boko Haram leader, was reported to have been killed by ISWAP fighters in a gun battle.

“I can authoritatively confirm to you that Al-Barnawi is dead. He is dead, and he remains dead,” the CDS said.

ISWAP and Boko Haram fighters have been in a bitter rivalry since the former broke away from the latter in 2016.

”You do also know as we move in the upward trend in the state of peace, then, of course, that should give you an indication that at some point, we are going to have a review of the setting and whether there is going to be a scaling down of military actions.

“But under the current setting, we have not made such a plan, and we have not assessed that time has come for us to undertake that kind of assessment,” Irabor added. 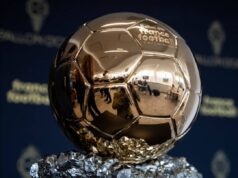 2019 Polls: EFCC Planning to Keep Okupe out of circulation – Lawyer