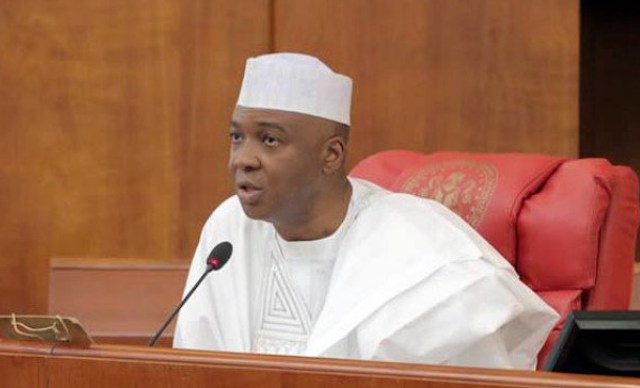 Senate President, Bukola Saraki says that the recent corruption rating of the country by Transparency International (TI) should be seen as a challenge to redouble efforts toward the country’s anti-corruption campaign.

Saraki said this at a two-day RoundTable discussion organised by the Savannah Centre for Diplomacy, Democracy and Development (SCDDD) in Abuja on Wednesday.

The Senate President spoke on the topic: “National Assembly and the Challenges of Combating Corruption in the Country.’’

The TI had ranked Nigeria as the 148th least corrupt country out of 180 countries in the world.

“This dialogue is coming just days after Nigeria was revealed as having slipped 12 places in the global corruption perception index with a score of 27 points.

“We are deemed to have performed poorer than our 136th position in the 2016 rankings according to TI.

“Even more sobering is the fact that we are ranked 32nd in Africa, out of 52 countries assessed on the continent.

“This piece of news is no doubt a matter of concern, however, it is my belief that we can take it as an opportunity and a challenge to redouble efforts geared toward the anti-corruption campaign,’’ Saraki said.

According to him, the rating should challenge the country to be more determined to strengthen anti-corruption institutions and processes.

This, he said was critical to tackle corruption without hindrance.

He said that lack of a sustainable plan of action for institutions charged with the responsibility of fighting corruption in the country remained constant.

Saraki noted that as a nation, our fledging democracy should not be justification for any ineffectiveness in the fight against corruption.

The Senate President, however, stressed that the tenets of anti-corruption should be built on a platform where issues were addressed holistically and without bias.

He further added that the time was ripe if not overdue to work out an achievable road map by competent officials and instruments unfettered by external or political influence or interference.

“As the legislature, we believe that to restore our economy and society, corruption has to be combated frontally. It cannot be a lopsided or compromised campaign,’’ he said.

Saraki pointed out that anti-corruption effort should emanate from a well-articulated platform, the integrity of which must be unassailable.

According to him, an integral part of representative mandate is to ensure equity and fairness on the part of government, and the use of resources in the interest of the people.

He said that true representation was the by-product of a government that had made equity, accountability, transparency and fairness the hallmark of its agenda.

This, he said could be achievable through enabling people-oriented and anti-corruption laws, policies and Freedom of Information Laws and adequate checks and balances on the Executive and Judiciary by way of legislative oversight.

He said that the 8th Senate since its inception had ensured extensive oversight, core fiscal policy, budget scrutiny and passage as well as transparency in the budget of the National Assembly.

“I am happy to note that we have recorded many achievements in our oversight role, and in terms of budget transparency, we were the first in the history of NASS to open our budget for public inspection.

“And with the many anti-corruption bills we have passed, I make bold to say that we are matching our words with action to complement the executive’s fight against corruption,’’ he said.

According to him, the budget process has showcased the drive of the Senate to eliminate the loopholes that corruption has consistently created in the economy.

He also said that the Senate had maintained that the national budget passed through legislative scrutiny to guard against inconsistencies.

Saraki said that there should be difference between fighting corruption and asset recovery, adding “we can separate these issues from what I call grandstanding.’’

Earlier, Prof. Ibrahim Gambari, the Chairman, SCDDD, said that all hands must be on deck for the fight against corruption to succeed in the country.

According to him, the fight against corruption is yet to succeed in the country because it is presently not seen as an all inclusive fight.

The two-day event was attended by various stakeholders including Civil Society Organisations (CSOs) and some Faith Based Organisations, among others.