The President of the Senate, Ahmad Lawan said on Monday that the current National Assembly is the most successful in law making since the return to civil rule in 1999.

Lawan made the remark as a guest lecturer at the first Distinguished Parliamentarians’ Lecture Series which was facilitated by the National Institute for Legislative and Democratic Studies.

He spoke on “The Legislature, Legislative Mandate and the People – The Reality and the Public Perception.”

The Senate President said the focus of the ninth National Assembly had been on legislations that are most likely to impact either on the democratic Institutions, economy, security or the livelihood of Nigerians.

“I dear say that the ninth Assembly has been the most successful in the area of lawmaking since 1999.

“We have broken many ‘jinxes’ and done many ‘firsts,’ overcoming traditional obstacles through consensus building and clever political brinkmanship,” Lawan said.

The Senate President said as of November 2021, about 2,500 Bills had been introduced in the National Assembly – 769 in the Senate and 1,634 in the House of Representatives.

“However, as I have repeatedly maintained, for us in the 9th Assembly it is not so much the number of bills as it is quality.

“We have focused our energy working on legislations that have a realistic chance of being assented to as well as those that have the potential to impact most on the lives of Nigerians,” Lawan said.

He said President Muhammadu Buhari led-APC had been the most proficient in granting assent to Bills stressing that available data on gazetted Acts showed that between 2015 and 2021, President Buhari had assented to more than 84 Bills, the highest since 1999.

The Senate President said the projection was that the figure would be significantly higher before the end of Buhari tenure in 2023.

“For twenty years, the National Assembly had attempted reforming the petroleum industry without much success.

“In the 9th Assembly, we prioritised the Bill in our legislative agenda and worked closely with the Executive to secure passage and assent.

“This historic achievement of the National Assembly means that Nigeria now has legal, governance, regulatory and fiscal frameworks for the petroleum industry that would promote optimal utilisation of the country’s abundant oil and gas resources.

“It will also enhance social and economic development and promote a conducive investment climate in the industry and foster the development of host communities.

“Without sounding immodest, we have equally concluded work on several other important pieces of legislations that have been signed into law, all of which have the potential to significantly enhance various aspects of our national life.

“The CAMA 2020 Act, also represents a landmark achievement representing the first time in thirty years that this law has been updated.

“The Act introduces measures to ensure efficiency in the registration and regulation of corporate vehicles, reduce the compliance burden of small and medium enterprises (SMEs), enhance transparency and stakeholders’ engagement in corporate vehicles and, overall, promote a more friendly business climate.

“The Deep Offshore and Inland Basin Production Sharing Contract (Amendment) Act 2019, which we passed and was assented to by the President gives effect to fiscal incentives given to Oil and Gas companies operating in the Deep Offshore and Inland Basin areas under production sharing contracts between the Nigerian National Petroleum Corporation (NNPC) or other companies holding oil prospecting licences (OPL) or oil mining leases (OML) and various petroleum exploration and production companies.

“This will significantly increase Nigeria’s earnings from oil wells located deep offshore and give it a fair and equitable share of income derived from its natural resources.

“Other Bills of great economic significance that have been passed by the National Assembly and awaiting Presidential Assent include the Public Procurement Act 2007 (Amendment) Bill, Recovery of Public Property Bill and the Amendment of Assets Management Corporation Act, among others.

“Only a few weeks ago, we concluded work on the Electoral Act (2010) Amendment Bill. Once operational, the law will strengthen our electoral process and further reinforce public confidence in democratic institutions, especially the Independent National Electoral Commission (INEC).

“The controversy generated by the Bill points to the ever-increasing maturity of our democracy and also amply demonstrated that the National Assembly is the people’s Assembly and will always listen to the voice of Nigerians.

“The 9th Assembly has also successfully pushed for a return to the January to December budget cycle. This was made possible by a successful collaboration between the President and members of the executive who have, since 2019, ensured early preparation and presentation of the budget.

“In addition to the Bills targeting the economy already discussed above, this Assembly took on the challenge of the COVID-19 pandemic and adopted legislative measures to cushion the effect of the pandemic on Nigerians, mitigate its consequences, limit its spread and improve the efficiency of our health system to cope with the unprecedented challenges occasioned by the pandemic.

“We gave expeditious consideration and passage for the Revised 2020 budget to tackle COVID and only recently approved the 2022-2024 Medium Term Expenditure Framework (MTEF) and Fiscal Strategy Paper (FSP).

“The National Assembly is working to consider the 2022 Budget Appropriation Bill within this legislative week,” Lawan said. 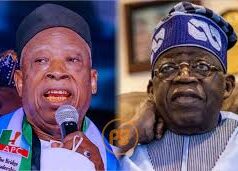 2019: Abe Vows to Continue with Ambition Despite Vandalization of His Party Office