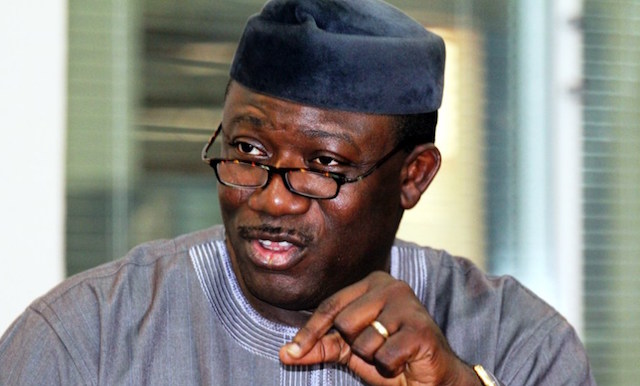 Chairman of the Nigeria Governors Forum, Governor Kayode Fayemi of Ekiti State, has said Nigerian youth should kick out the ruling All Progressives Congress in 2023 if they  are not satisfied with the party’s performance.

Fayemi spoke at ‘The Platform’, an annual programme organised by Covenant Christian Centre at Iganmu, Lagos on Saturday.

The Governor,while reacting to the rising wave of relocation of Nigerian youth to foreign countries, pleaded that they (youth) stay to rebuild Nigeria.

Fayemi said the five point demand of the EndSARS protesters last year was laudable but noted that the intension to of those who hijacked the protest which he said was regime change, tainted the agitations of the genuine protesters.

He said the only way to change a regime in a society is through the ballot and not violence.

The governor urged the youth to organise themselves against the APC or team up with those organising ahead of 2023 to change the party if they are not satisfied.

Fayemi said the youth should stop relocating to other countries and focus on making Nigeria better.

He said; “Don’t succumb to despondency, there is a lot to hail in this country. There is a lot to frustrate you, a lot to want to make you give up and pick that visa and go to Canada.

“I know it (Canada) is a popular destination but you know what? There is also a glass ceiling in Canada. When you get to the top of it, you will now discover there is a glass ceiling there. This is the place where there is no glass ceiling, let us work towards making it a better place.

“Another election is going to come if you do not like what APC is doing. Organise, stop agonising, organise against the party. Link up with others who are organising and then kick the APC out of office and put people that you think will do better, not creating a situation of anarchy.”