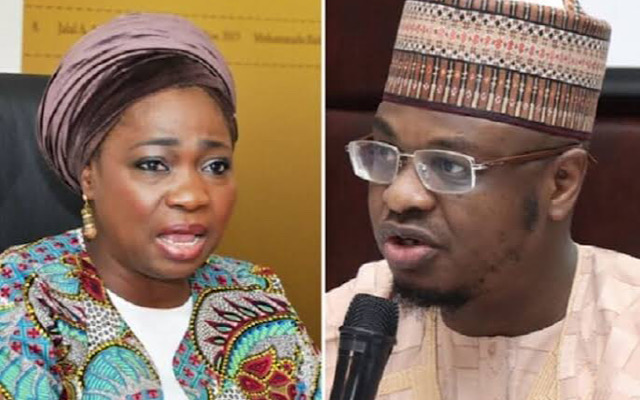 The recent public spat between the Minister of Communication and Digital Economy, Dr Isa Pantami, and the Chairman, the Nigerians in Diaspora Commission, Mrs Abike Dabiri-Erewa, is a clear case of inter-agency rivalry which is inimical to the growth and development of the country.

NIDCOM chairman, Dabiri-Erewa, had in an interview accused Pantami of sending gunmen to eject workers of the Commission from the fifth floor of Nigerian Communications Commission Complex in Abuja. Pantami, however, denied the accusation, saying he never gave such directive to gunmen to evict the commission’s workers. He described Dabiri-Erewa’s claim as a “fat lie.”

This is not the first time the public will be fed with stories of possible cracks in the Muhammadu Buhari-led administration. The rumoured clash between the former Chief of Staff to the President, late Abba Kyari and the National Security Adviser, Babagana Monguno, is one of the instances of cracks in the administration. However, the Pantami-Dabiri-Erewa clash is unprecedented if their public exchange of words on the social media app, Twitter, is to be considered.

According Dabiri-Erewa, the Nigeria Communications Commission, a parastatal of the Ministry of Communications, donated the office in question to NIDCOM for the use of its staff. “In one year, we don’t even have an office. The office we got, given to us by NCC, we were actually driven away by the Honourable Minister of Communications and Digital Economy, Mr Isa Pantami. Within two days, he drove us out with guns. The place was given to us by the NCC,” she alleged.

In a statement referenced by Pantami and issued by Dr. Henry Nkemadu, Director, Public Affairs, NCC ,however, countered NIDCOM chairman’s claim, saying security men were only on its premises to ensure security for a presidential visit.

The statement said; “Incidentally, after the offer of the office spaces to the Diaspora Commission, the Director General (DG), Mrs. Abike Dabiri-Erewa had not visited the Complex to take possession of any of the offices and also the Commission had not started using any of these spaces as offices. As is usual in ensuring security and accountability before, during and after presidential visits, the building had to be cleared to allow for only known and identifiable persons to have access within the Complex. Therefore the Honourable Minister of the Federal Ministry of Communications and Digital Economy, Dr. Isa Ali Ibrahim Pantami could not have sent armed men to drive the staff of the Diaspora Commission out of the Communications and Digital Economy Complex. At this time, only NCC Staff were accredited to have access within this premises as required by the security officials. All the properties belonging to the Diaspora Commission are safely warehoused in some of the Offices in the Complex.”

Dabiri-Erewa’s reaction to Pantami’s rebuttal would give the impression of a possible pre-existing cold war between the two. In her tweet, the former House of Representatives member accused the Minister of being a serial disrepecter of women, making a veiled reference to a past incident in February.

“An Islamic scholar should not lie Hon Minister .( Phd)You did that to me because I am a woman .Your disrespect for women is legendary Left the ugly incident behind me since Feb. But pls release all our office eguipment.Public office is transient .@DrIsaPantami,” she tweeted.

The exchange between the two top government officials on Twitter is  another another indication of a possible lack of understanding, clout-chasing and disunity in the Buhari-led administration which had been pointed out by public affairs analysts  in the past. Some Nigerians who commented on the issue on Twitter noted that such matter between the officials should have been treated as an internal affair and not as a social media issue.

The implication of an openly displayed enmity among government officials under the same administration raises question about the capacity of the President as the overall head of the administration. The clash could snowball into sharp division within government if not arrested immediately. A government with internal bickering and division will give room for sabotage through unhealthy rivalry which will have dire consequences for the populace.

Nigerians, going by their various reactions on the social media about the incident, are waiting anxiously the action to be taken by President Buhari to show that he is in firm charge of his administration