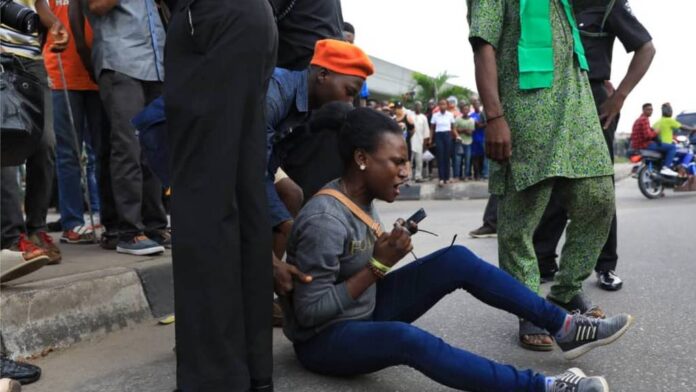 A lawyer and human rights activist, Barrister Tope Temokun, has condemned the attacks by law enforcement agents  on some protesters who took part in the #RevolutionNow protest which took place on Wednesday across the country.
In a terse message he personally signed and released to the public, Temokun said the needless resort to violence by Nigerian police and the military against peaceful protesters in Abuja, Lagos and other cities of Nigeria today “must stand condemned by all men of conscience in this country.”
“It was observed early this morning that the protests in Abuja and Lagos and other cities were so peaceful and organized with citizens carrying placards with civil inscriptions corresponding to their government, both at the federal and state levels, of where the shoes are heating up on the citizens of this country.
“All of us cannot queue behind the thieving politicians in their personal quest to drain this country of any meaningful life and the protesters were therefore perfectly within their rights in demanding a better country with a government of clearer direction and their actions are therefore very lawful and constitutional,”  a part of the statement read.
The activist further said that the protest  seemed perfect “till the law enforcement agents invited in by the masters to employ their bullets and tear gas. We have said oftentimes that these were highly reckless tactics that all civilized nations have dropped behind in their evolutionary history.
He called on Nigerian governments at all levels on the need to adhere to the rule of law and respect the right to peaceful protest of the citizens “if we must have any meaningful progress as a nation.
“We again call on the Nigerian authorities to release the peaceful protesters arrested illegally today in Abuja, Lagos, Osogbo and other cities across the country. A demand for a better country, a better father fatherland, is never a crime.”