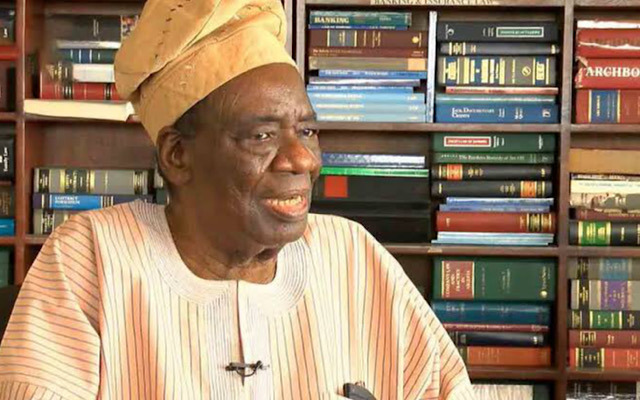 A former Attorney General of the Federation, Chief Richard Osuolale Akinjide, SAN, took his last breath in the early hours of Tuesday in Ibadan, Oyo State capital, after a protracted illness. He died at the University College Hospital, UCH, where he was admitted.

Akinjide, a Senior Advocate of Nigeria, born in 1932 was at the centre of the drama of the Supreme Court judgment which validated the 1979 presidential election victory of Alhaji Shehu Shagari of the National Party of Nigeria (NPN) over Chief Obafemi Awolowo of the Unity Party of Nigeria (UPN) in the Second Republic.

Before his Second Republic political fireworks, the legal luminary was also a notable recurring decimal in the First Republic where he served as Education Minister.

Akinjide was born in 1932 in Ibadan and attended St Peter’s School, Aremo, Ibadan between 1937 and 1942. He proceeded to Oduduwa College, Ile-Ife in 1943 and passed out in Grade One (Distinction, Aggregate 6). Akinjide travelled to the United Kingdom in 1951 for his higher education and was called to the English Bar, at Inner Temple, in 1955 and later in Nigeria. He subsequently established Akinjide & Co, his famous law firm.

As consistent with many young Nigerians who travelled to the West for academic purpose, Richard Akinjide returned to the country to join Nigeria’s political terrain as the country prepared for self rule. As a lawyer and potential politician, Akinjide had been learning his ropes in London where he had been called to bar. He was elected member of parliament, Ibadan Sout-East Constituency in the House of Representatives the late 1959 and was later appointed Minister of Education under the administration of Sir Tafawa Balewa in the First Republic. He was part of the Prime Minister delegation to New York to get Nigeria’s membership of the United Nation. After the 1966 military putch which swept away the First Republic, Akinjide was one of the politicians detainedr but was later released.

With his growing influence in Nigerian politics from pre-independence till the termination of the First Republic, he continued to be relevant going into the Second Republic as he was the Legal Adviser of NPN which had Shagari as presidential candidate. He would later be famous for his role in Shagari’s defeat of Awolowo at the Supreme Court in the legal battle over the 1979 presidential election. The electoral umpire then, the Federal Electoral Commission of Nigeria (FEDECO), announced that NPN polled 5,688,857 votes while its closest rival, the UPN, polled 4,916,657 votes. The controversy on how to get the two-third of 19 states led to a legal tussle initiated by Chief Awolowo which dragged to the apex court. Akinjide as the representative of the NPS and Shagari however came up with a (in)famous statistics which validated Shagari’s election. The two-third statistics would later earn him the sobriquet, “Mathematician” which translates to “Onisiro” in Yoruba language.

He was later named the Attorney General and Minister of Justice by Shagari administration. The political dispensation would later be truncated. Chief Akinjide witnessed two military coups as a government official.

He was the father of a former Minister of State for FCT Olajumoke Akinjide. He was at the 2005 National Political Reform Conference (NPRC) where he served in the Committee and Models and Structure of Government.