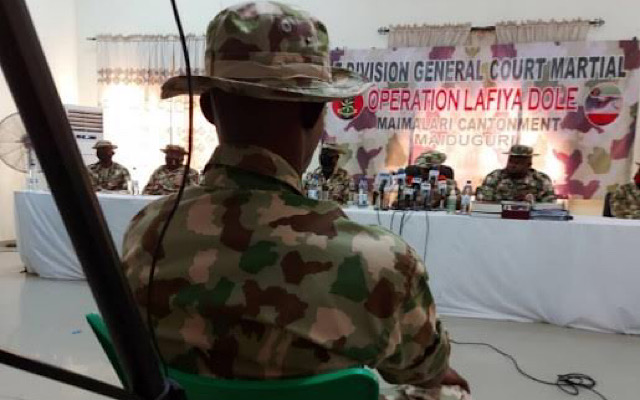 Private Azonna Mmaduabuchi has been sentenced to death by firing squad by the Nigerian  Army 7 Division General Court Martial sitting in Maiduguri.

Mmaduabuchi, who was serving at 202 Battalion Bama, was found to have deliberately fired nine rounds of ammunition on Lieutenant Babankaka Ngorgi who instantly died.

Delivering the judgement at Maimalari Cantonment Maiduguri on Tuesday, President of the Court, Brigadier General Arikpo Ekubi said the soldier was found guilty of murder punishable under section 106 sub section A of the Armed Forces Act 2004.

He said the gruesome murder of Lieutenant Ngorgi ,who was the adjutant of the battalion, by Private Mmaduabuchi negated the tenants of military regimentation.

Mohammed was convicted of reckless misuse of firearms leading to an accidental discharge that killed a 12 year old Adamu Musa at a wedding ceremony in London Ciki area of Maiduguri metropolis.

Also sentenced were Sergeant Sani Ishaya and 3 others who were also convicted of manslaughter, where the court handed over a sentence from one to four years imprisonment.

All the convictions are subject to confirmation by superior authority.