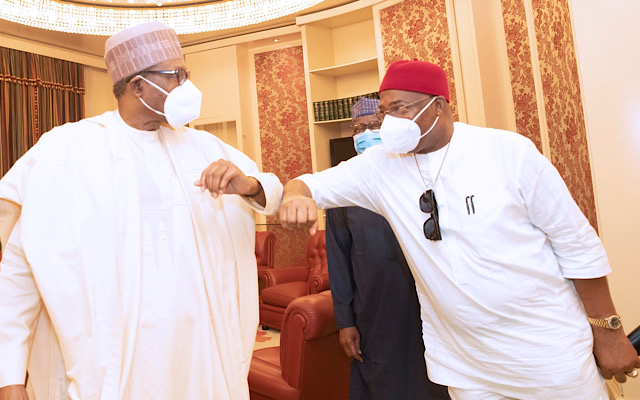 The Governor of Imo State, Hope Uzodimma, on Tuesday, met with the President, Muhammadu Buhari, in a ‘closed door’ meeting at the State House in Abuja.

Though the agenda of meeting has not been disclosed, it is suspected to be  connected to the  rising feud beteween the governor and his predecessor Rochas Okorocha, now a senator.

The Uzodinma government via white paper had recently seized some assets, including a university and an estate belonging to Okorocha and his wife.

Matters went south on Sunday  when Okorocha led some aides to break the lock on Royal Spring Palm Estate on Akachi Road, a property which Okorocha claims belongs to his wife.

But the government officials in counter-measure descended on the property to chase away the Okorocha crowd.

The state police command later arrested Senator Okorocha in connection with the incident.

Some aides of the former governor were also arraigned at a Magistrates’ court in Owerri on Monday.

They were accused of conspiring among themselves to disobey a lawful order issued by the state by removing the seal of the state government and entering into the sealed premises of Royal Spring Palm Hotel and Apartments.